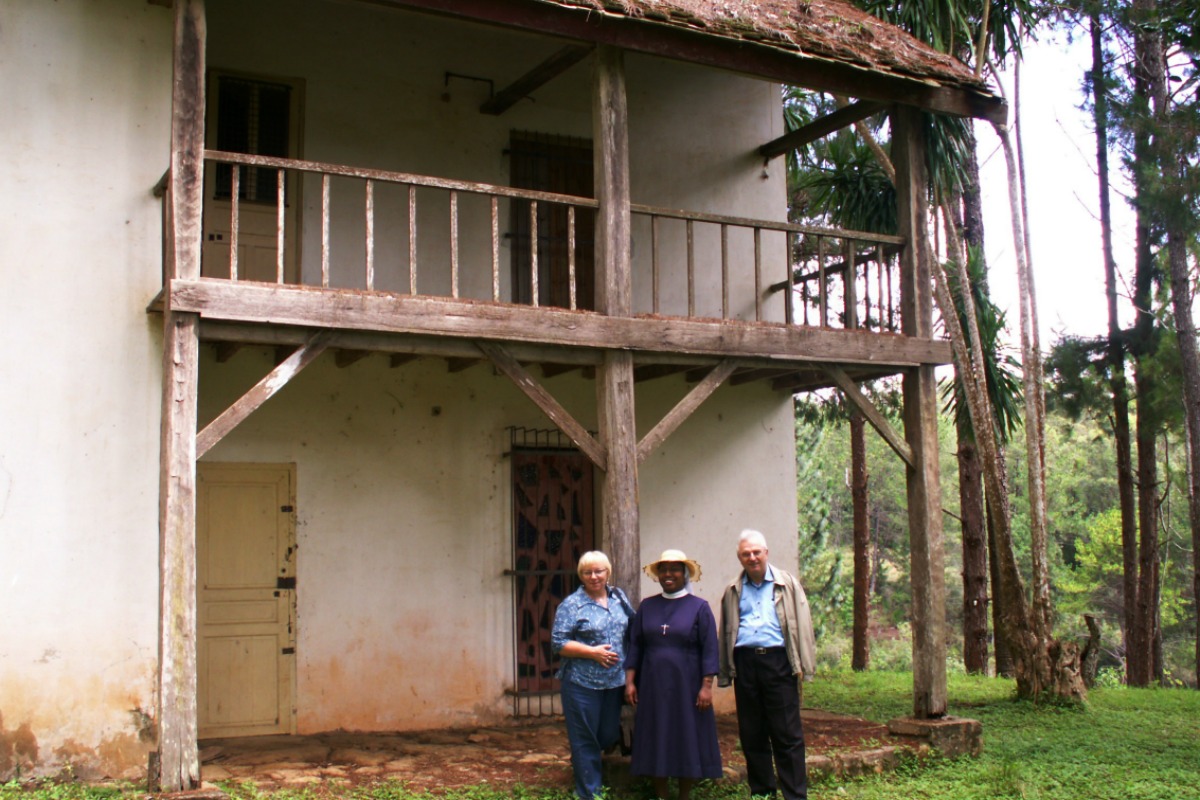 There were many meetings of ours. But before I came to learn about the Apostle of lepers and made friends with him, I knew little about him. For me he was one of those, who here, on earth, found the way to Heaven.

The book yellowed with age

I had a visitor one day. It was my friend. He brought me a book and said that he was going to lend it to me, but only for one night. I was to give it back to him in the morning, as there were a lot of other people on the waiting list willing to read it… He left quickly and his departure looked as a sign for me to start reading.

The book was yellowed and shabby. Taking it into my hands I was afraid it might disintegrate. It was published in 1927, had more than 500 pages and the title was: “The Letters of Father Jan Beyzym SJ - Apostle of Lepers on Madagascar”.

“What of interest can possibly be in the letters of a missionary, who worked with lepers?” - I thought and opened the book. I looked through the introduction and the first letter. After reading the second one I felt so involved in the process of reading that nothing could make me take my eyes from those yellowish, flying apart pages. It was a deep night and I was still on Madagascar, in Marana with Father Beyzym and his “black birds”. In the morning I had an awful headache, my eyes were burning. I was dozing at my desk at work. But I felt so happy that I managed to read the book from cover to cover. It was a pity that I had to give it back.

I read a lot. I never read such a book, though. What a language! What a style! They were not letters, they were reportages, documentaries. It was not a narration about the lepers and their Servant, but the lecture of faith, hope and love.

Take me to Madagascar

I dreamed about Madagascar even before I hardly ever knew about Father Beyzym. Having heard a lot about that island from my cousin, a missionary on Madagascar since 1978, I always wanted to visit that faraway and exotic island. My dreams somehow did not “wanted” to come true. Having come to know Father Beyzym closer, I started asking him to help me with that dream of mine. I was used to asking him to intercede on my behalf with God on different, more or less difficult issues. I always felt his support. There was no support in the case of Madagascar, though, and I started to lose hope.

But in August 2008 I got a plane ticket to Madagascar as a birthday present! I was so overwhelmed with joy that I wanted to shout it out to the whole world. No fear of the new and unknown. No doubts whether I would make it or not…

I landed at Ivato airport in Antananarive, the capital of Madagascar, in the middle of November. From the first minute of my arrival, I felt that I viewed it by Father Beyzym’s eyes. The several million population city is located at twelve hills. It did not cause much excitement. “It is a capital, but not to be compared even to Przemyśl!...”. I recalled Father Jan’s words, looking at grey filthy streets, at colonial buildings, thousands of temporary houses, where inhabitants and misery go hand in hand, at “glass houses” scattered here and there.

The heaven of my dreams was in the country area. The heaven in three colors: red, green and blue. Red was the land and the water in the rivers that cut their beds in the slopes of the mountains. Green were the tropical forests and the rice fields. Blue was the sky, even more bright blue than in Italy.

I spent three months on Madagascar. I had enough time to travel to remote and interesting places. The most cherished dream was, of course, a trip to Marana. My Friend - Father Jan Beyzym was waiting for me there. It was the 28th of November, when I finally stopped at Marana gates.

Marana is neither a city nor a village. It is a secluded place for lepers. It was then and it is now. From the nearest city of Fianarantsoa to Marana is only 7 km., but to get there is quite difficult. The road, not of the best quality, climbs up the hill along the chasm, at the bottom of which one can see a river serpentine and bright greenery of the rice fields. Father Beyzym covered this road many times. The traveler nowadays is greeted by the figures of saints and the blessed, carved from the eucalyptus and housed in small chapels. I was moved recognizing two of them - Saint s. Faustyna and Blessed Father Beyzym.

The leprosarium Father Beyzym built more than a hundred years ago is full of greenery and flowers. The mountains have the smell of eucalyptus. Eucalyptus and pine trees grow by Father Beyzym’s house. Cicadas sing continually.

The 2.5 m. high fence with the sticking pieces of broken glass at the top and solid metal gates brought me back to reality. I realized that I was not entering the heaven. Talking to the lepers in the wards only strengthened my thought. “Oh, how they had to suffer 100 years ago. There were no painkillers, medicines, bandages then. Father Beyzym had only his heart for them”, - I thought.

In the church, where the sick have been praying for a century, is quiet and cozy. Cicadas concert was heard through the open window. The loving eyes of Our Lady of Czestochowa were looking at me from the altar image. Although the Mass in the church was celebrated in Malagasy, it was a very special event for me. The Homily as well, because the priest preached it in Polish, despite the fact that there was a Malagasy nurse and a medical student participating. And then… And then was the most awaited moment. We visited the chapel, where the sarcophagus with Father Beyzym’s relics is located.

Having crossed the Marana gates I had my eyes wet with tears and tightness in the throat. I tried not to cry in front of strangers, but when I found myself alone with Father Beyzym, I poured with tears. I cried for a long time and my tears were the only prayer I was able to say.

When the sister accompanying us went to sacristy for a moment, the priest (my cousin) quickly removed the cover plate and I could cast a glance inside. Through a narrow glass pane I saw brown ashes, some small bones, scull fragments. The bones will turn into dust in the course of time. Only good that Father Beyzym did would last…

The visit to Marana brought me closer to Father Beyzym. He became my friend, who I can rely on and who knows me perfectly well. He could sympathize with me, give a serious reprimand or punish me if necessary. I always clearly feel his protection. The proof of it I felt the next day after my visit to Marana. We went to Tulear (Toliara) for a couple of days. I had an awful accident there. I slipped on the tile in the bathroom. Falling, I hit the stone frame of the shower cubicle with my head and back. There were no stars in my eyes, but only a big black depth dragging me inward. I caught a short breath. My whole life flashed before my eyes like a movie. “Father Jan, help me”, - the thought ran through my mind and I lost my consciousness.

When I opened my eyes, I was lying on the wet floor covered with blood. I could have fallen to death… But my head, spine cord, ribs were unharmed! Yes, it hurt awfully. I was not able to get up from that stone floor by myself, but I had only my elbow and my back injured. The back continued bleeding for some time.

Father Jan was in Tulear with me. I have been constantly asking him for help since that day. I do not bother him very often, though, as he has a lot of work to do not only here, on earth, but in Heaven as well. I try not to bother him with trifles. I ask him for help only in difficult and important issues. I feel Father’s hand even if I ask his assistance with smaller things. He helps. I think he does truly sympathize with me...