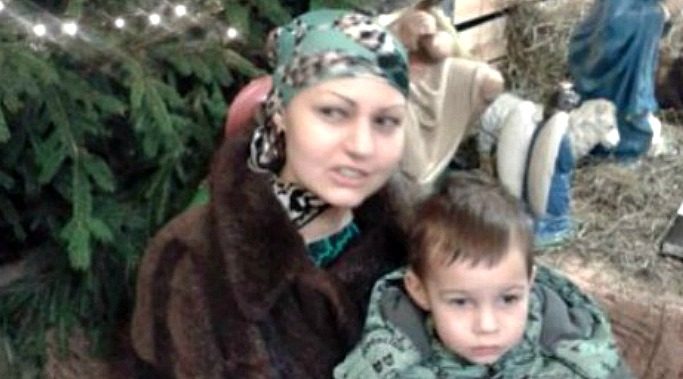 Lena is 26. She married Dmytro four years ago. They have three-year old son Danylo. Young people belong to the II Neocatechumenal Community in Grechany Parish, Khmelnitsky, Ukraine. They found their road to God after eventful searching and turbulent experience. He shows them the way and leads them by the Community as well.

In the face of the illness

The road of Dmytro and Lena is marked by the harsh suffering. The doctors identified a big (about 20 cm.) tumour on Lena’s lungs, i.e. tuberous sclerosis in the end of March 2014. The examination results left no doubt – cancer. They had to decide quickly what to do next: either to undergo the treatment in Kyiv, Ukraine, in a special oncologic hospital, or to go abroad. The family council chose Debrecen, Hungary.

Dmytro’s family lives in Uzhgorod, about 100 km. from Debrecen. Thus, young people could stay with them, as to live in Debrecen during the treatment time was beyond the family means. This city was also chosen because of the highly qualified oncologists and the possibility of free treatment, paying the certain kind of medical insurance only.

Lena started her long treatment way of the cross in the oncologic hospital in Debrecen. The biopsy made to examine Lena’s case only proved the results of the previous examination. It was one of the most malignant tumours. Because of the malignancy location, the surgery was a bad option, as other organs could be damaged in the course of the surgery. The decision was taken – chemotherapy. The treatment first stage, the chemotherapy administered once in fortnight, gave no result. It was August of 2014.

Prayer through the intercession of Blessed Father Jan Beyzym

From the very beginning of Lena’s illness, all of us: Lena’s husband, parents, relatives, neocatechumenal communities prayed for her recovery. From the 8th to 11th of August 2014 the pilgrimage was planned in the intention of the vocation discernment for the young people from the neocatechumenal communities. At first our pilgrimage was planned as one-week trip, but because of the war in the South of Ukraine, we could not follow the planned route and visit the south of the country. Thus, the trip was to take place in the Western Ukraine and last for four days. So, our plan was: to start with Penitential liturgy in Vinnytsia on the 9th of August and to travel to Lviv through Kremenets and Pochajiv. After over-night stay and evangelization on the Rynok Square we were to leave for Chortkiv. The next day we were to head from Chortkiv to Kamianets-Podilsky, where after dinner a vocation meeting was to take place in the yard of the famous castle well-known from H. Sienkiewicz’s novel “With Fire and Sword”.

We fulfilled our plan, with small changes, though. As we travelled very close to the birth place of Father Beyzym, the day before the trip Father Tadeusz Sarota suggested visiting the place and praying for Lena’s recovery at the Chapel, which was constructed there two years ago to commemorate the 100th anniversary of Father Beyzym’s death and his birth to Heaven. And so we did.

After breakfast on the 9th of August we left Vinnytsia. The weather was marvellous.

But there was a sudden storm and downpour near Starokostiantyniv. The changing weather conditions did not interfere with our activities. We revealed the Word for the young people, who were seeking the light for their vocation. Thus, we reached the village of Beyzymy in Lischany community of Iziaslav region. The village is 4 km from the main road. It is approximately 300 m. from the parking place to the clearing, where the Beyzym’s manor house was located. Father Beyzym was born there in May of 1850.

The Chapel here was consecrated by Bishop Leon Dubrawski on the 13th of October 2012. About 100 faithful from Khmelnitsky, a group of local people and community authorities took part in the consecration ceremony. We erected the altar by the chapel and prepared everything necessary for the Eucharist celebration. When I started celebrating the Holy Mass, the sky became dark and the heavy rain started to fall. Young people tried to protect the altar and me covering us with umbrellas and raincoats. Thus, I celebrated the Mass.

Two thoughts came to my mind, while I was celebrating the Eucharist: either devil showed his anger because we gathered here to pray through Father Beyzym’s intercession for Lena’s recovery, or Our Lord gave us a signal that His graces for those, who pleaded to Him with faith and humbleness, were as abundant as the rain downpouring at us. There was no possibility to sing and I did not deliver the homily. When we finished celebrating the Mass and started to gather liturgical objects and the rest of our things, the rain stopped and it started to clear up. We planned to have dinner after the Mass, but it was too wet there, so we did not eat our agape. We returned to our bus soaking to the bones.

It is important to stress that nobody was complaining or protesting. We felt that great things were happening. We were allowed to touch the grand mystery of the Church Saints Community. The Saints in Heaven help those on Earth, who go on pilgrimage of faith. I felt it here, at this sacred place, where Jan Beyzym, who devoted his life to the merciful service for the lepers of Madagascar was born and who supported us with his prayer at that very moment.

Our pilgrimage continued through Pidhirtsi, Lviv and Chortkiv to Kamianets-Podilsky. We returned strengthened with God’s graces and experiencing His mercy. Many young people discerned their vocation. But we were wondering about Lena.

“You do not have cancer”, – the doctor said

When we returned home, we came to know that the kind of chemotherapy treatment for Lena was changed. The new one demanded even more patience. The treatment procedure was strict and rigorous for the fear of the possibility of being infected. Lena was isolated. In her hospital ward there was a special tent erected to protect her from any kind of viruses or bacteria. The treatment was to last for a month. She underwent a new chemotherapy course. The information we got was of different kind: once the news was good, once it was bad. All of us were waiting for the good news. But suddenly, Lena appeared on one of our common liturgies before Christmas with her husband and son. It was a great surprise for us and a great joy. It was a sign that things changed for the better. Lena said that the tumour scaled down from 20 to 5 cm. She had to continue her treatment and do new examination to prove the positive treatment tendency. For some following months Lena continued her visits to the hospital for therapy and returned home. The doctors said that she had to wait for the final results, but we were filled with hope.

I attended the Russian Region Jesuit Congregation in Briukhovychi near Lviv in the beginning of July 2015. After that I had the retreats for the clergymen in Medjugorie. I prayed for Lena there. I returned home on the 12th of July and on the 13th of July I got the SMS from Valery, the man in charge of our Community: “Lena sent the message that her doctor said that she did not have cancer any more”. Lena was in Debrecen in the beginning of July. She went through the final examination and after getting the results, she sent us such a joyful message.

Thanks be to God!