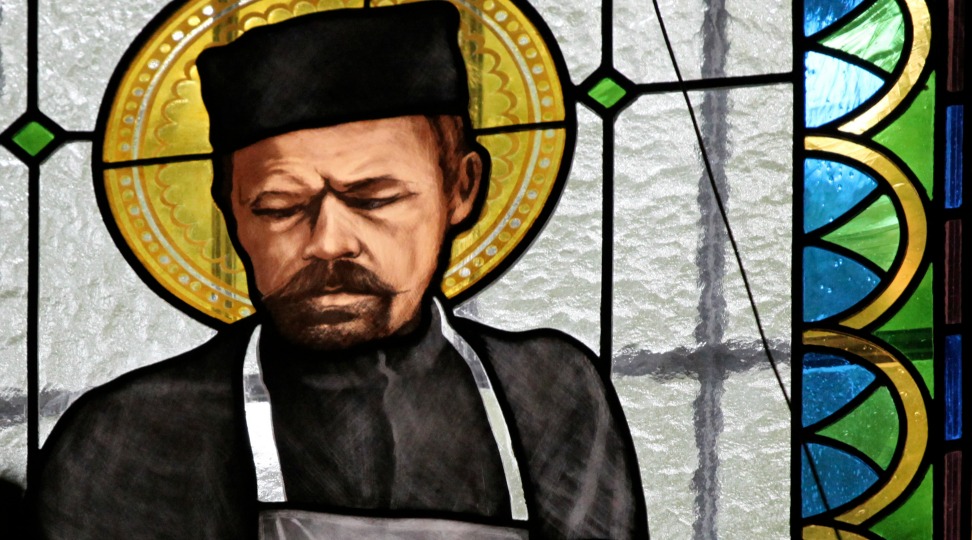 Father Beyzym once admitted to the Prioress of Lobzow Karmel that he felt the call for the priesthood from his early age. He said that it was difficult and strange for him to live in the world and that he dreamed about the soutane. The secular outfit discouraged him and he did not like wearing it. After eighteen years of the religious life Father remembered the feeling of joy and happiness, when Father Henryk Jackowski, his Master of novices, told him that he was accepted to the Order and the monastery wicket closed behind him.

The joy of the calling

The religious vocation was a grace and a gift of God. And one should “ask Our Lord Jesus for the perseverance in vocation”. The greatest punishment for Father Beyzym would have been the loss of vocation. Father would prefer to be struck with leprosy and die rather than be outside the Society as someone, who lost his vocation. He took it as condemnation, when someone left the Order at fault.

The vocation given by God was happiness and joy on earth. However, one needed to protect it and ensure it was not lost or weakened. “Therefore let anyone who thinks that he stands take heed lest he fall” (1 Corinthians 10:12). To change the Order for the world was like to change the heaven for the hell. Father Beyzym prayed for the perseverance in vocation with the holy fear and sincerely, humbly, like a hell, was afraid to lose it. He would dread on the mere though of loosing vocation and tears would fill his eyes. But we were fortunate, if Our Lord Jesus gave us the vocation, He gave us the strength to persevere in it. Father Beyzym was morally sure that he had the vocation for the Society of Jesus and work for the lepers. He thought that the proof of that was in his health and strength for such difficult work and service.

What a true calling could give a person? Except for joy and happiness, it gave him freedom and independence to serve God in the Order, as a person did everything willingly, with love. “Order is a heaven on earth, the world is a prison. In the Order one has true freedom, joy, glee and a secure way to heaven”.

Being Our Holy Mother’s devoted servant, Father Beyzym never forgot about Her role in the vocations rising up. It was “She, who would populate Karmels with good vocations”.

Vocation – the secure way to heaven

Valuing his vocation over his life, Father Beyzym thanked God with all his heart for the gift of his calling, considering it as a guarantee for salvation. It kept Father away from the sinful world and its deeds that would only absorb and distract him from the things of God.

Because of his long monastic experience, Father Beyzym knew perfectly well, what could weaken the vocation and lead to its loss. He was very upset with those, who left the Order and definitely knew the reasons why. Loosening of the discipline and mutual indifference could transfer the monastery into hell. It was the indirect warning for the monastery superiors, whose duty was to take care of the discipline and brotherly love in the community.

Jesus chooses and appoints those, who He wants to go and bear fruit (J 15:16). All the stages of vocation and monastic life – from the novitiate and to the solemn profession – were the steps forward. Father reminded that simple truth to Mother Magdalena and warned her not to regret the period of her novitiate, but courageously move forward and bear the good fruit on every stage of her sacred service in the monastery. It was the process of constant growth and maturation in the religious vocation, which could be called the constant formation today.

Two month before his death Father Beyzym preached a sermon on vocation for the Sisters of St Joseph de Cluny, who worked in Marana with him. It was not only the summary of his views on the religious vocation, it was the summary of his own experience, as Father never talked about anything he did not experience or implement into his life.

The goal of the sermon was to renew the religious life zeal. The question was - what our vocation expected from us. Was it a greater concern for our own salvation from the bad influence of the world? Father Beyzym did not mean the salvation of neighbours, he meant their support. The religious vocation was God’s grace in the freedom to follow Jesus Christ by carrying the cross every day. The vocation was a proof of God’s love to us. The love of God that chose us and helped us to carry the cross we decided on.

Father continued, asking specifically, what my cross was. First of all, it was my religious vows and my daily duties resulting from those vows. Were we faithful to the religious poverty? Did we really want to experience the consequence of poverty and live as truly poor people? Were not we too prosperous, having everything that is necessary for our lives, even the things that made the life pleasant?

Faithfulness in the observance of vows

The vow of chastity, distracting us from physical pleasures, made us closer to God and gave us the freedom of serving God and our neighbour (1 Cor 7, 32:35). Through the vow of obedience we renounced the self will to surrender to God’s will, revealed by our superiors to us. The offer of one’s own will was a noble gift. It helped us to follow the steps of Our Saviour, who was our way to God Father, being obedient upto death on the cross (Philippians 2, 8). That vow gave us confidence that we took the right road to heaven. It was, at the same time, the expression of our freedom, because nobody was forced to the religious obedience. That sacrifice was absolutely voluntary.

Our religious cross, continued Father Beyzym, was not too heavy, as it was only a particle (“a splint”) of the cross of Jesus. Jesus and Mary’s cross and the crosses of our brothers and sisters, who suffered and were persecuted for their faith, were much heavier. Our Lord Jesus rewarded us for that not very heavy cross of ours and promised us everlasting life, if only we faithfully persevered in our vocation to death.

How we bore the cross of our vocation, Father Beyzym continued. Did we become more and more (magis) like Our Master, following Him closer and closer? Did we live by the spirit of our Order, sticking to the sacred rules that protected us from following the wrong course?

The need of devotion for Our Lady

As in all the sermons that Father Beyzym preached either to the nuns or to the lepers, Father mentioned the Blessed Virgin. He always asked if we truly loved and cherished Our Holy Mother, as She was the best protector on our vocation way. “Doing everything and everywhere with Our Holy Mother, through Her and for Her, we can be sure, that we will get to our true and eternal fatherland”.

Being a realist, Father Beyzym reminded that such feature as vigilance was as necessary for the calling as the testing our faithfulness and zeal. We were constantly exposed to temptations and persecutions, but with the help of God and Mary, we could stay faithful to our calling, even in small things, providing support for our neighbour.

We needed to return to our primeval zeal to protect ourselves against the spirit of the world and before our love cools off.

Father taught to examine ourselves, to ask God to forgive our sins and neglect, to ask Mary for help and to pray for our Order in the belief that our spiritual good was the good of everybody.

It is worth mentioning that Father Beyzym’s religious and missionary vocation example of working for the lepers caused not only admiration, but also the desire to follow him. “Since I am here, I do not even remember how many refusals I sent to different countries, may be a dozen or so. The priests, monks and nuns, men and women, St Francis Tertiaries asked to be accepted to help me”. Our confreres from Galicia Province: Father Apoloniusz Kraupa, brothers Kazimierz Buzalski, Wojciech Pieczonka and others applied too. It was the impact of the sacrificial life and vocation of Father Beyzym.