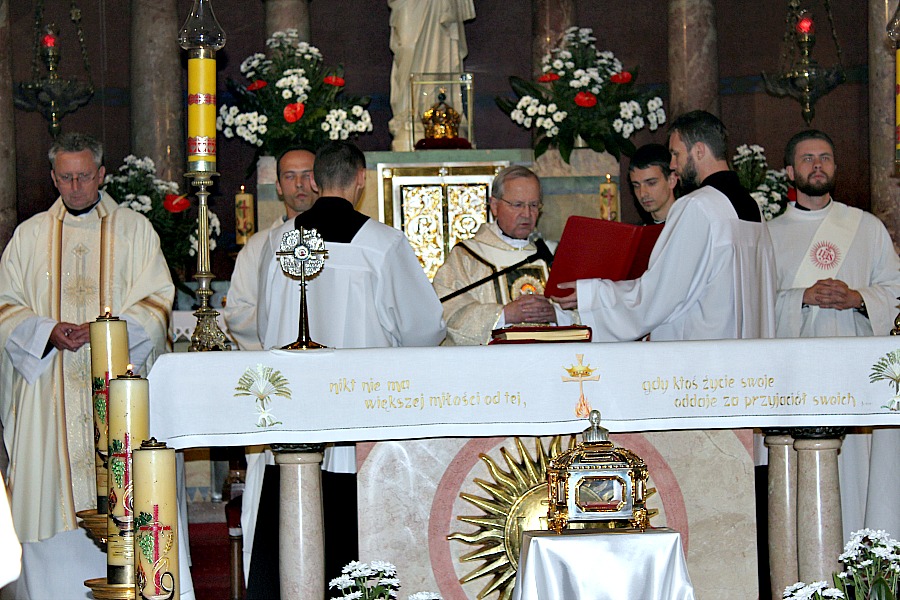 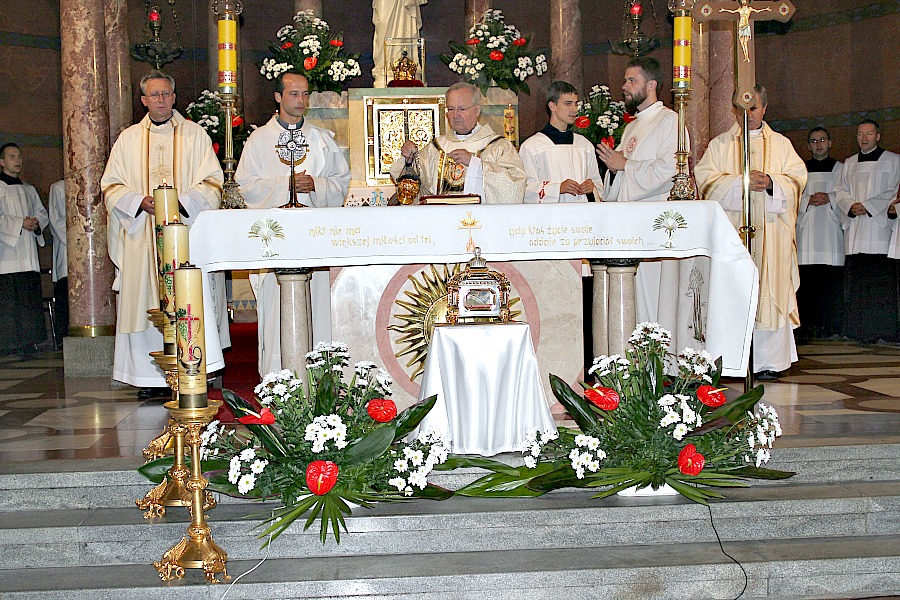 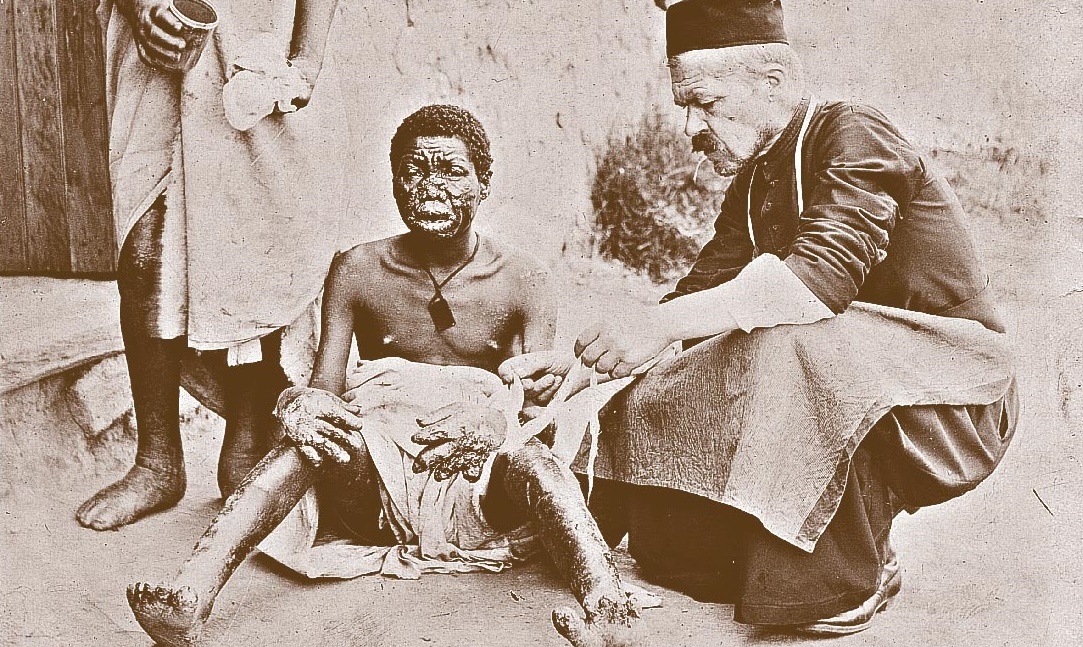 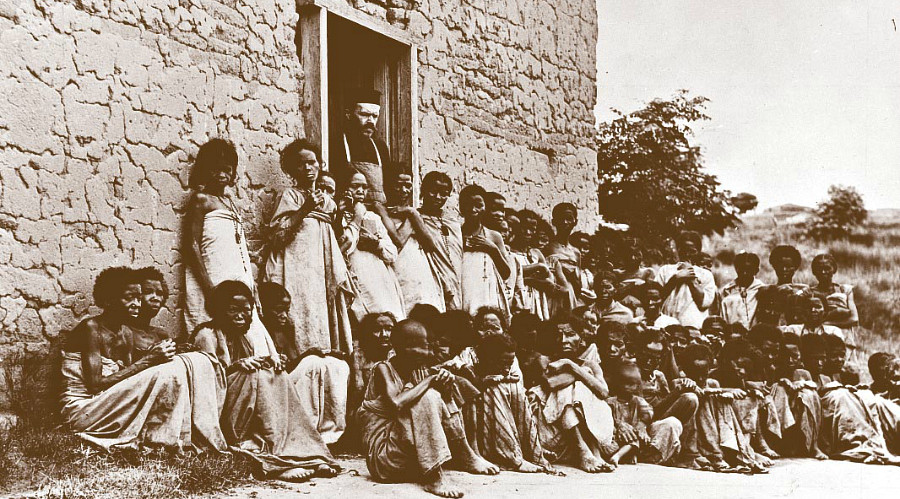 AND HE RESIDED AMONG THE LEPERS

The liturgical commemoration of Bl. Father Beyzym,
on the 12th of October 2016 at
the Basilica of the Sacred Heart of Jesus in Krakow.

The Gospel about ten lepers was read in our churches last week. St. Luke described their meeting with Jesus. As he was going into a village, ten men who had leprosy met him. They stood at a distance and called out in a loud voice, “Jesus, Master, have pity on us!” (Luke 17, 12-13). Let us consider those simple words: “they stood at a distance”. The heartbreaking reality is behind these words. The lepers were forbidden to approach the villages and dwellings of people. They could only call from the distance asking for the piece of bread. The fear of the illness and its transmission was so strong among the ancient and modern societies that the lepers, apart from the insufferable physical pain, were condemned. The illness was equal to the civil death.

When Father Beyzym left Krakow for Madagascar in 1898, so that he could take care of the miserable, like a good Samaritan, their situation was not at all better. In one of his letters to Poland he wrote: “I came to know today that the government and the local do not take the lepers for people. They consider them the outcasts of the human society. They are expelled from the cities and villages. Let them go whenever they want, lest they stay among the healthy. The leper is a leper, not a person. A lot of those ill-fated wander about the isolated areas until they are able to wander, then they fall out of exhaustion and die of hunger” (13.IV.1899).

Father Beyzym did not keep far from the lepers and this was the keystone of his heroism. They did not have to call out to him, because it was he who came to them and settled with them, at first in Ambahivoraka asylum, not far from the country capital and then in the central part of the Red Island – in Marana, located in a short distance from the city of Fianarantsoa. Father Jan settled permanently there to stay with the lepers day and night, to feed them, nurse and care for them. Thus, he broke the barriers of fear, curse, disdain and callousness, which separated the sick from their families and society, condemning them to the slow death not only of the illness, but of hunger. Dressing their wounds he treated their souls, bringing them closer to God and the Holy Sacraments”.¹ 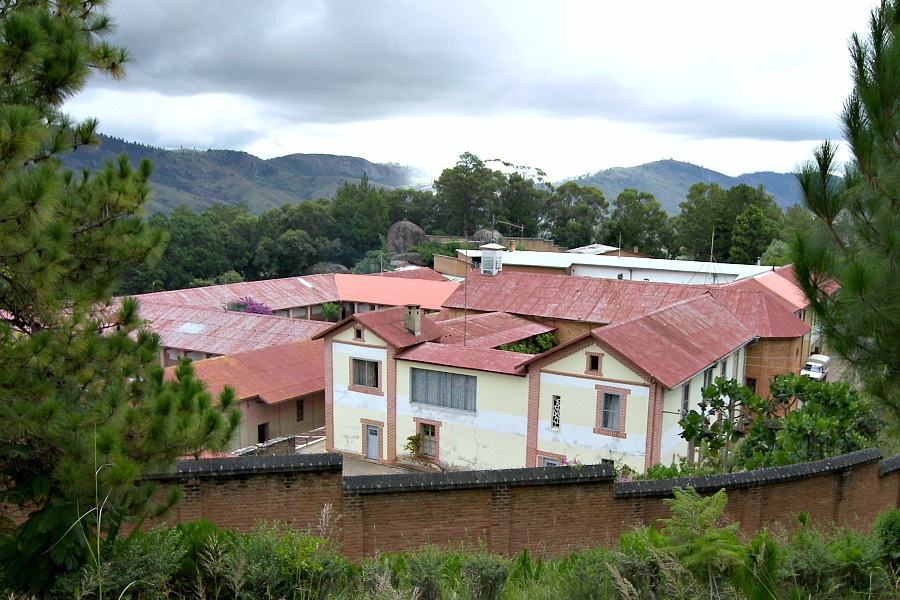 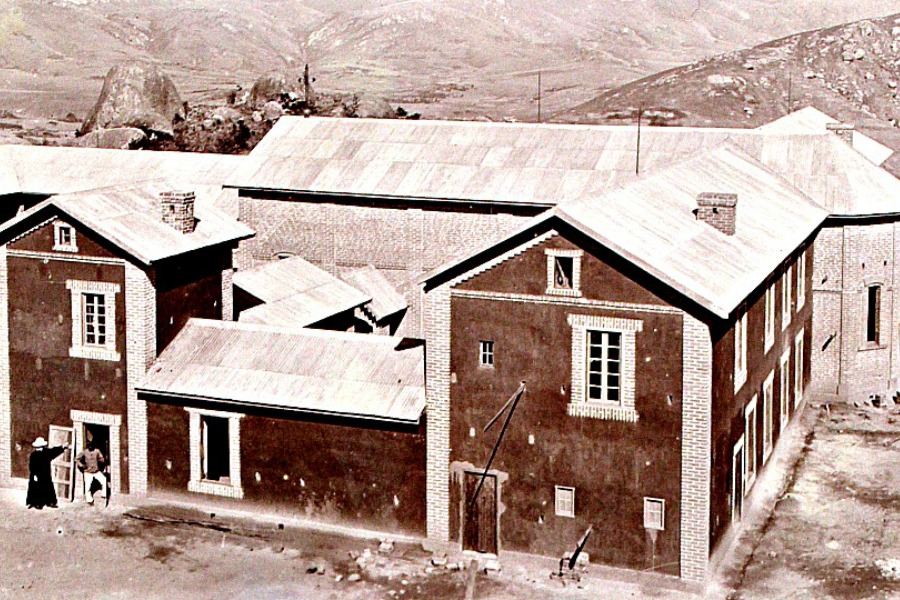 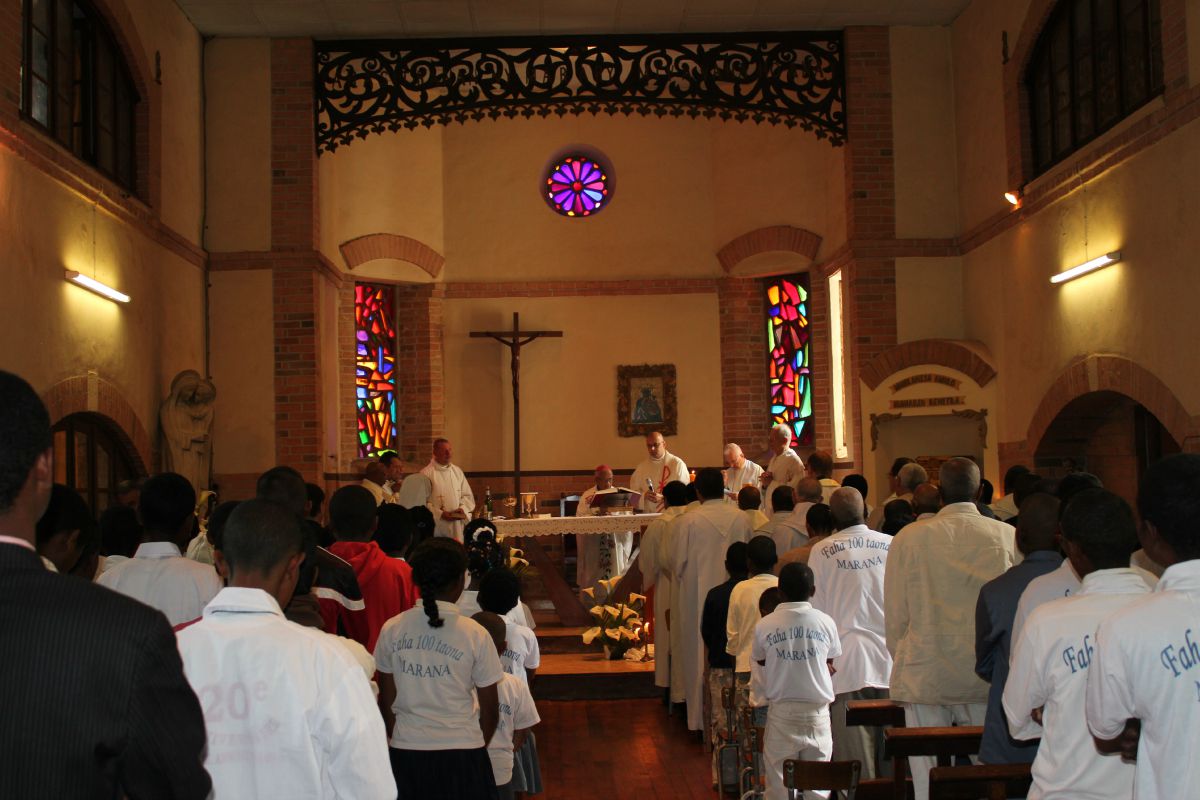 HEROIC EFFORTS OF OUR FELLOW-COUNTRYMAN

Father Beyzym built the leprosarium in Marana. It was opened on the 16th of August and is functioning to the present moment. Thus, he became a pioneer of a modern leper care system. The leprosarium was built owing to the generosity of the Polish society. Father Marcin Czerminski, Krakow Jesuit and the editor of “Catholic Missions” played an important part in the whole story, as he talked Father Beyzym, his confrere, into writing the letters, which he later published on the pages of this popular magazine. Those letters were answered and the answers, very often, were the “widow’s mites” of the responsive hearts – the impoverished Polish society, who supported the heroic effort of the fellow-countryman.

“The Leper Servant” died of exhaustion some months after the leprosarium was opened, on the 2nd of October 1912, the day the Church celebrates the Memorial of the Holy Guardian Angels. He himself became the Guardian Angel for the lepers. Marana patients pray in the chapel, the part of the leprosarium, every day. The image of Our Holy Mother of Czestochowa is in the high altar. Father Beyzym brought this image to Madagascar from Krakow and carved the frame for it in Marana.

I was fortunate to visit Marana and pray at the tomb of Father Jan at Marana cemetery, where he was buried together with the other leprosarium patients. Later his mortal remains were unearthed. Some of them were put into a sarcophagus in a leprosarium chapel. Some, in a casket, were taken to Krakow and installed in the Basilica of the Sacred Heart of Jesus. The Blessed Missionary, the man rough at the first sight, but with a big honest heart, generously endowed his two homelands: his Motherland, where his vocation matured to be ready for the heroic service and the “homeland of his choice”, where he burned out, serving the miserable, whom Jesus called “the least of these brothers and sisters of mine” (Mt 25, 40). 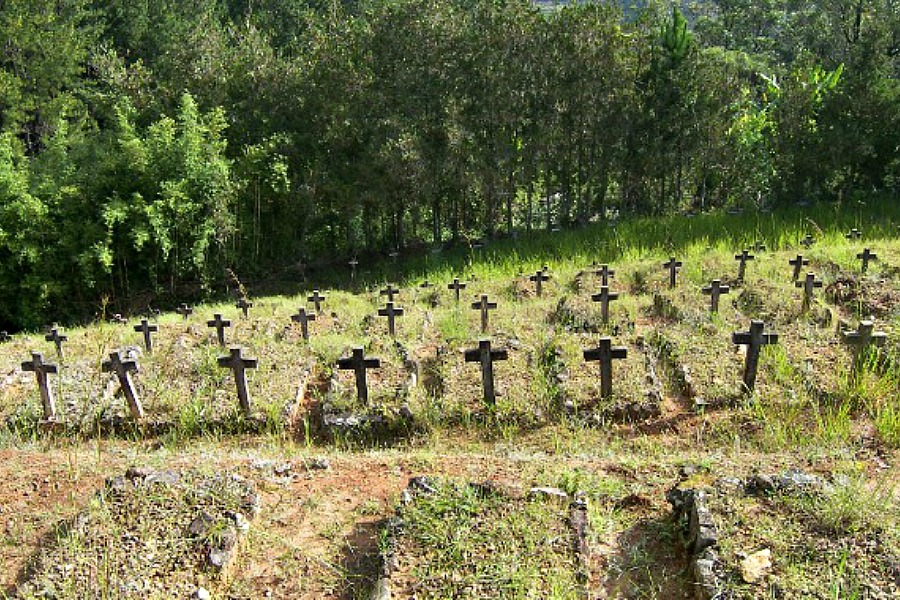 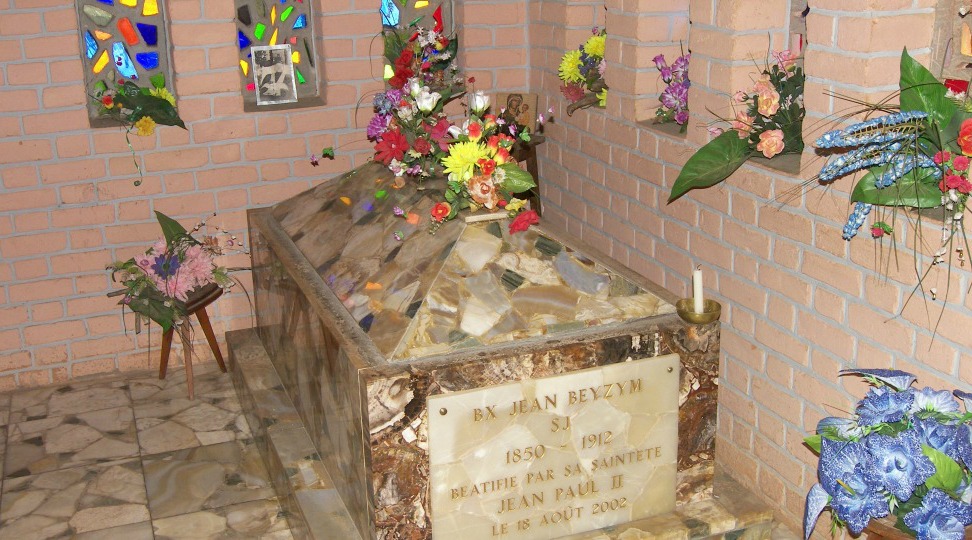 LET US LOVE IN DEED AND TRUTH

Brothers and sisters, the word of God, as the Psalmist says, - “is a lamp unto my feet, and a light unto my path” (Psalms 119, 105). The word of God allows us to see the world around us in the right light, to see our life and vocation, to see our present and eternity that awaits for us.

St. John the Apostle says: “We know that we have passed from death unto life, because we love the brethren. He that loveth not his brother abideth in death” (1J 3, 14). The source of knowledge of this fundamental truth about a man is the truth about Our Lord, who is love. Since God created the human person in his image and likeness, He created us for love. St John continues: “Hereby perceive we the love of God, because he laid down his life for us” – and makes the conclusion – “and we ought to lay down our lives for the brethren” (1J 3, 16). How are we to love? The answer is clear-cut: “My little children, let us not love in word, neither in tongue; but in deed and in truth”(1J 3, 18).

Father Beyzym wrote a profound comment to those last words. He wrote this comment by his service to the most miserable. He wrote it day by day during his fourteen-year stay on the island. The words of Jesus: “I was sick, and ye visited me” (Mt 25, 36) meant for him to settle with the lepers, to build a leprosarium for them, to provide food for them, to dress their wounds that awakened only disgust and sorrow in other people. The “visiting of the sick” for him was to restore their human dignity, to remind them that we were all children of one loving God. He was reliable in it, as he was the angel, the messenger, the herald of the merciful love of God leaning over the lepers’ destiny. 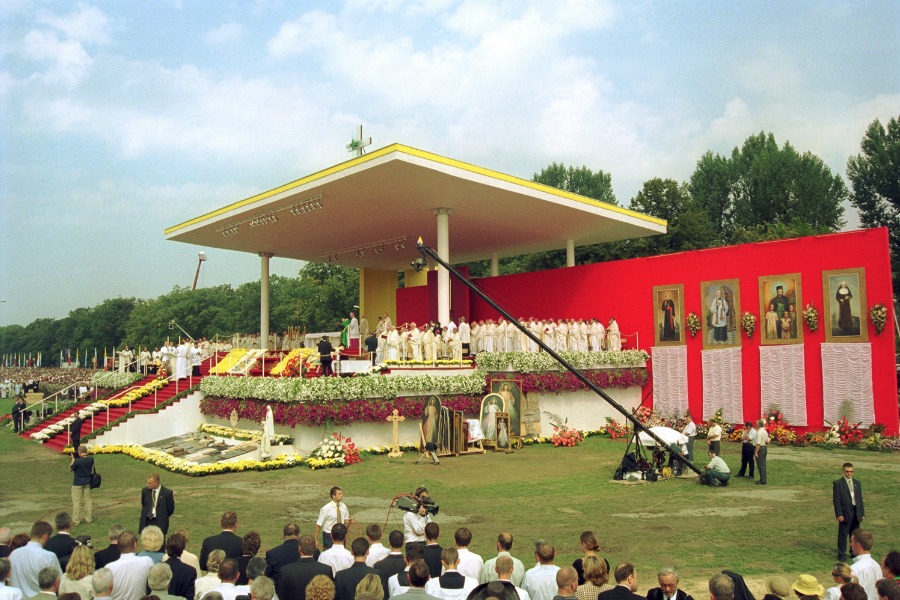 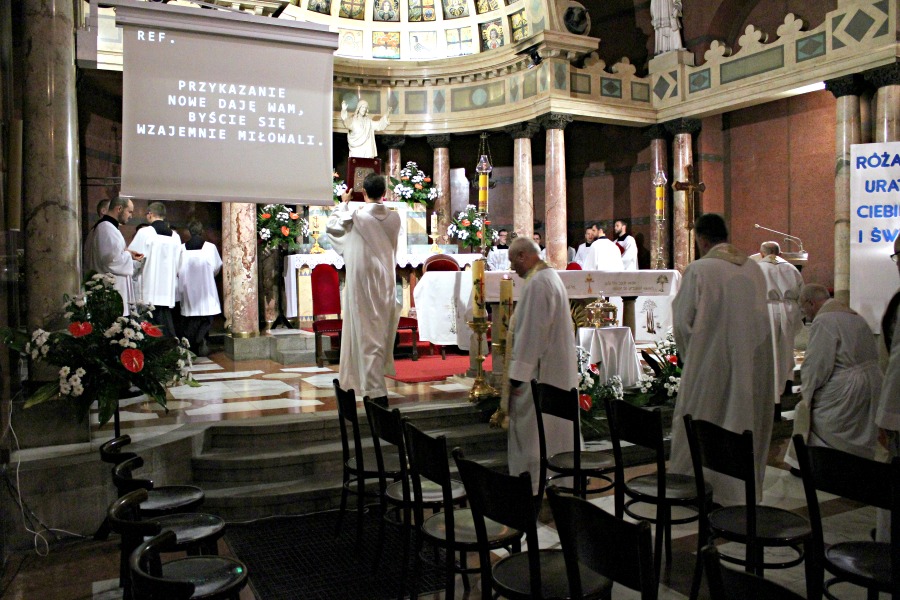 THE APOSTLE OF THE CREATIVITY OF MERCY

Young Karol Wojtyla admired Father Beyzym’s character. The whole country talked about the missionary who served the lepers in the mid-war period. Exotic Madagascar, due to Father Beyzym’s efforts, was associated with the name of Jan Beyzym for decades.

John Paul II visited Madagascar. On the 1st of May 1989 he celebrated the Eucharist there. One hundred eighty lepers from the leprosarium, founded by the Polish Jesuit, took part in it. The Pope celebrated the Mass at the altar, built by the Blessed and used his chalice. The image of Our Lady of Czestochowa was by him.

The complement of the spiritual bond that connected John Paul II and Father Beyzym was the beatification ceremony on Krakow Blonia, which took place the next day after the consecration of the Sanctuary of Our Lord’s Mercy 14 years ago. Blessed Father Jan Beyzym is a living example of the “creativity of mercy”, for which St. John Paul II appealed during the Sanctuary consecration.

The mercy issue is constantly up-to-date. The Extraordinary Jubilee Year of Mercy, celebrated by the Church, reminds us about the “creativity of mercy”. This creativity will prompt us, where to find the Madagascar of Father Beyzym, where are the locations, situations, people, who need our help and actions of our sensitive hearts.

During today’s Eucharist let us pray for such an attitude, sensitivity, asking our Blessed Father Beyzym for the spiritual support. Amen.